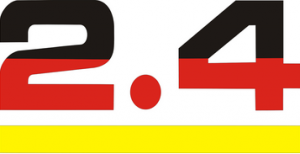 In 2001, we adapted our old statutes from our founding year 2017 to the latest developments, such as the requirements of the DSV as well as those of the public benefit. There was a good internal discussion among the 2.4mR members with a number of suggestions that were incorporated. See also in Forum.

The new one is at an extraordinary general meeting on the sidelines of the World Cup in Sneek Statute adopted unanimously on July 6, 2017 and supplemented by a passage on honorary memberships on October 5, 2018.

The actual Membership Fees was decided by the general assembly on March 24, 2017 and is valid from 2018.

The charitable the German 2.4mR Klassenvereinigung eV has been certified by the Aachen District Tax Office from January 1, 2018.

No rating so far, be the first!

What can we do better?

What do you dislike? You stay anonymous.

This website uses cookies while you navigate through the website. Out of these cookies, the cookies that are categorized as necessary are stored on your browser as they are essential for the working of basic functions of the website. We also use cookies for statistical purposes, to improve our website or to maintain the forum. These cookies are only saved in your browser with your consent. You have the option to reject these cookies. Then you cannot actively participate in the forum, for example.
Necessary always active